What’s the Difference between Bail & Bond 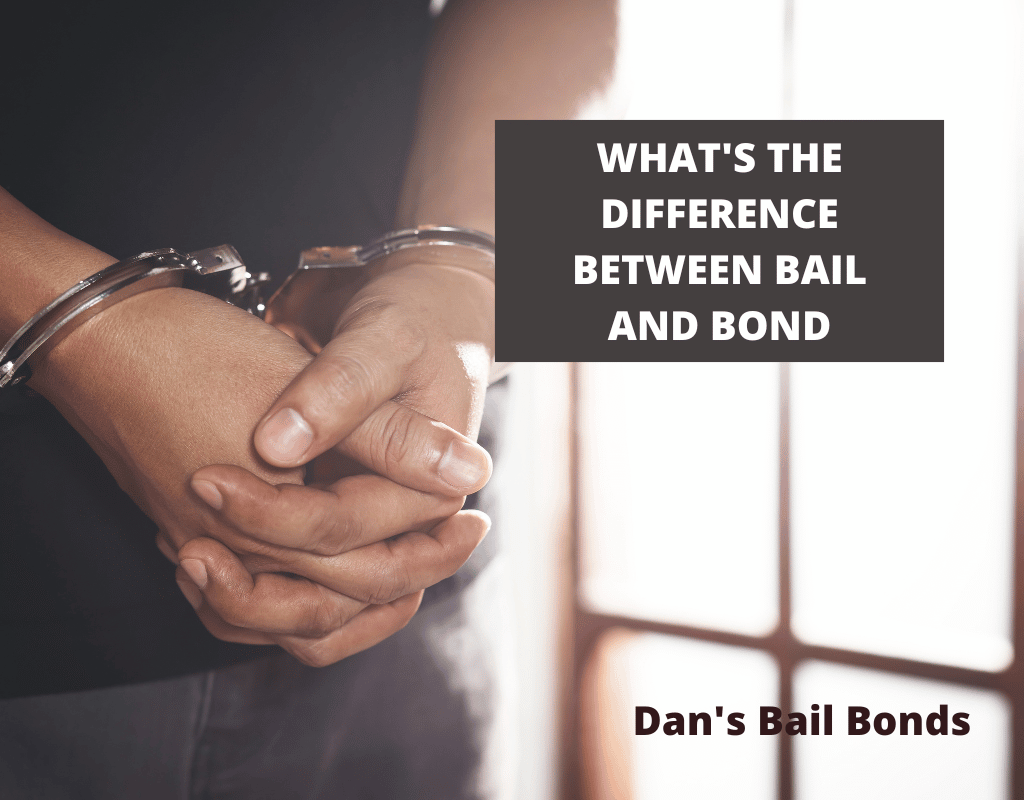 When you’re arrested, you may wonder, “What’s the difference between bail and bond?”

Being arrested and incarcerated is frightening, no matter what the charge. When you understand what to expect throughout the process, it’s a bit less scary. In this blog, you’ll learn what bail is, the difference between bond and bail, and how you can rely on a bail bondsman to get you out of jail quickly and efficiently.

The Difference Between Bond and Bail

After an arrest, you will be booked and scheduled for a bail hearing. We’ll discuss this hearing in a bit more detail shortly. For now, you need to know that bail is a financial commitment to return for your next court hearing. Rather than sit in jail waiting to go before a judge (and potentially a jury), you will give money to the courts as collateral. Have you ever had to leave your driver’s license behind to test drive a car at a dealership? It’s just like that.

The difference between bond and bail is who puts up the money. If you’ve got the money to lay out, that’s wonderful. You can go home within hours of your bail hearing. For many defendants, the amount of the bail set is considerably higher than they have to spare. Fronting this money could mean missing a car payment, a mortgage payment, or feeding the family for a long period of time. This is where a bond comes into play.

A bond is money that someone lays out on your behalf. You still get out of jail; however, you don’t have to have the cash handy.

Either way, you get to go home to your family. The difference between bond and bail is where the money comes from.

After your arrest and booking, you are called before a judge for a bail hearing. During this time, the judge will communicate why you were arrested and what charges are pending. He or she will then decide whether you will:

The judge makes this decision based on a number of factors, including:

After weighing these factors, the judge sets or denies bail. If bail is denied, you will have to stay in jail until your next court date. You have the right to a speedy trial, however, this will depend on the court’s calendar.

If they set bail, they will set an amount to pay to the courts for your release. In the next section, let’s take a look at the different types of bonds.

Now that we’ve discussed the difference between bail and bond, we need to look at the different types of bonds available to you. Remember, the court will only take cash to release you. A bail bondsman, on the other hand, will require physical collateral.

This type of bond does not include the exchange of money. It is often referred to as ROR or “released on their own recognizance.” The personal bond is a contractual agreement that the defendant will return for their court date, and will refrain from certain behaviors during this time. The behaviors can include, leaving the county or state, committing other crimes, or engaging in an activity related to their arrest. There may be other conditions to adhere to as well. The judge will only offer this agreement if they are confident the defendant will attend court dates.

The term cash bond is used interchangeably with “bail” and “bail bond.” In essence, a third party (often a family member of the defendant), pays the money to the court so the defendant is released. Like a Surety bond, the money will be forfeited if the defendant fails to appear in court.

When you work with a bail bondsman to post bail, they will need physical collateral. By temporarily handing over the title to your property, the bail bondsman can ensure that if you don’t attend your court date, they will not lose the money they have posted on your behalf.

Why Do I Need a Bail Bondsman?

Well, if you have a ton of money laying around, you don’t. However, if you’re like most people, laying out thousands of dollars would create financial hardship. When this is the case, reach out to an experienced, trustworthy bail bondsman. If you live in Los Angeles, Van Nuys, or Rancho Cucamonga California, Dan’s Bail Bonds is professional, discrete, and available when you need them most. This is where understanding the difference between bond and bail comes in handy.

What If I Don’t Show Up to Court?

The threat of losing a large amount of money or your physical property is often enough to ensure attendance at future court dates. But, it’s not always. There are some defendants who would rather “skip bail” and are unconcerned with the consequences. When this happens, any bail posted will be forfeited. If you or a loved one fronted the money, it will be lost. If a bail bondsman fronted the money, you will lose whatever physical collateral you gave them.

The moral of that story… show up to court.

Understanding the difference between bond and bail is the first step to getting yourself or a loved one out of jail quickly. There’s no reason to sit in jail awaiting your trial. If the judge sees fit to set bail, you can either post it yourself, or reach out to a bail bondsman, and go home where you belong.