Mistakes to Avoid When Securing Bail Bonds in Van Nuys 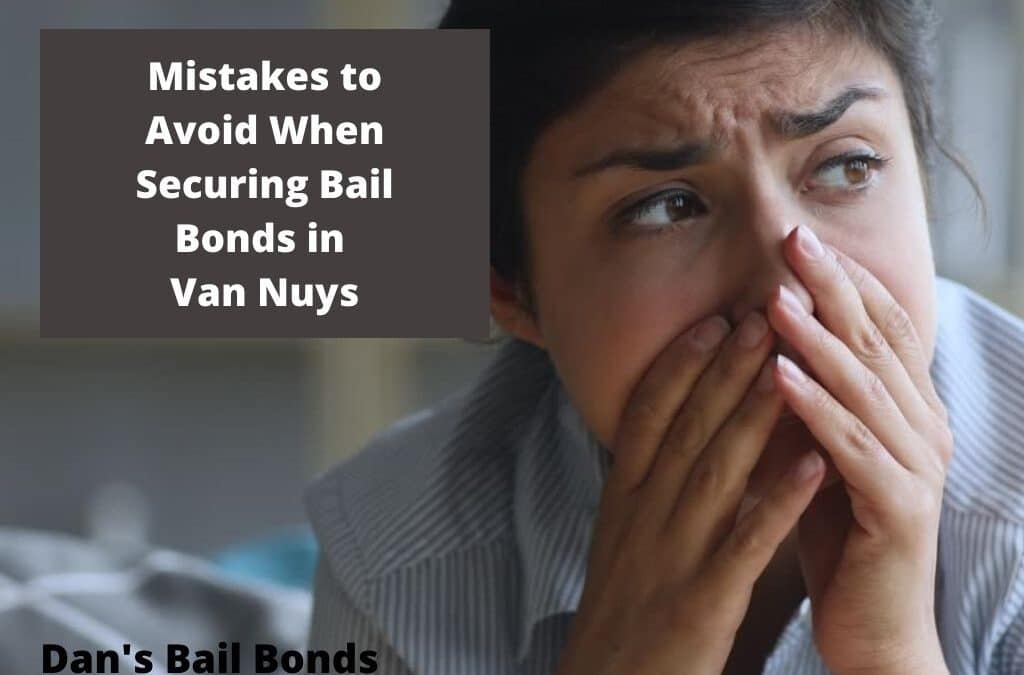 You got arrested in California, and now you need to secure bail bonds in Van Nuys. Unfortunately, you may not be thinking clearly during this ordeal, and approaching your bail wrong could spell disaster. We’ve compiled a list of the top 5 mistakes to avoid when securing bail bonds in Van Nuys. Armed with this knowledge, you can prevent costly problems and spend less time in jail.

If you get arrested, and you have money lying around, you could just call a friend or family member and have them bail you out of jail. However, bail is expensive. Judges have a responsibility to the courts and the community to ensure:

The threat of losing a great deal of money (your bail) is oftentimes enough to encourage compliance. Unfortunately, the bail amount is too expensive to pay out of pocket for most people, and they’ll need to use a bail bondsman.

While most bail bondsmen are upstanding individuals focused on getting you out of jail quickly and efficiently, they aren’t all. One way to determine this is to take a look at the amount of the fee they charge. The California Department of Insurance set the bail percentage at 10%. This is the amount a bail bondsman can charge you to work with them. To illustrate, a $10,000 bail bond will have a $1,000 fee. This fee is non-refundable.

Some smaller, newer, less reputable bond agencies will charge you a lower percentage (which is illegal) to gain your business. Avoid these bail bond agencies at all costs.

It’s a good policy not to lie in general. However, this is even more important when it comes to your bail bondsman. Both the bail bonds agency and the courts will ask you questions during the bail process. These may include your address, employer, and your ability to pay your bail obligations. Be truthful. If you choose to provide false information, your bail may get revoked. When this happens, the judge issues a bench warrant, and you will go to jail yet again. If bail gets set again, you’ll have to sign a new agreement with a bond agent and pay another fee.

Waiting to Get Bail Bonds in Van Nuys

If you are arrested at night, you may think you have to stay in jail until regular business hours. This isn’t always true. Once you’ve spoken to a defense attorney, contact a bail bondsman to begin the process. A good bail bondsman is available 24/7. They will start the paperwork immediately. It may take several hours to process the paperwork with the courts. So the earlier you start it, the better.

A bail bondsman posts bail on your behalf. In order to do that, he or she will charge you the 10% we discussed earlier and then take collateral for the rest. The collateral can include:

If you do not adhere to your bail conditions, they will sell the collateral to make up any money they lost.

You may have enough cash and property to secure your own bail. Or you may need to enlist the help of a co-signer. A co-signer could be a friend or family member who:

Choose them wisely. If you choose the wrong co-signer in the beginning, it will slow down the process. Finding a suitable co-signer who will work with your bail bondsman to get you out of jail will take more time and effort.

Not Adhering to the Requirements of your Bail

When you get bail bonds in Van Nuys, there are only two conditions under which you’ll get your bail money back (minutes the 10% fee):

Remember, bail ensures you return to court when required, and you follow the judge’s guidelines. If you don’t, you forfeit any money and property you have put up. If you enlisted a co-signer’s help, they will forfeit their money and/or property. When this happens, you will have a very angry and disappointed loved one on your hands.

When you go before the judge, pay attention. Learn what you must do. Then do it!

When you get arrested in California, you are in luck. Dan’s Bail Bonds is a professional, reliable bail bonds agency with 20+ years of experience. They are open 24/7 to start the bail process any time of day or night. Thankfully, they are also mobile so your friend or family member doesn’t have to go through the difficulty of bailing you out of jail in person.

Dan provides bail bonds in Van Nuys, Rancho Cucamonga, and Los Angeles. Call Dan’s Bail Bonds and make your life (and the lives of your loved ones) must easier.